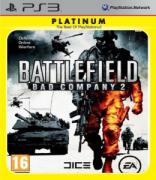 The March 2010 smash hit Battlefield: Bad Company 2 now comes in an Ultimate Edition. Experience the game that New York Times calls “a better game than Call of Duty: Modern Warfare 2” and the best-selling March release on record, now with even more explosive content. The Ultimate Edition includes Battlefield 1943™ and Onslaught co-op mode, as well as the early-access unlocks from the Limited Edition. The package also includes a VIP code granting access to a multitude of downloadable map packs. Battlefield: Bad Company™ 2 brings the spectacular Battlefield gameplay to the forefront of next-gen consoles. Tactical destruction is taken to new heights with the updated DICE ‘Frostbite™’ engine. Players can now take down entire buildings or create their own fire points by blasting holes through cover, thereby delivering a unique experience in every match. Battlefield: Bad Company 2 on console features best-in-class vehicular combat, set across huge sandbox maps, for up to 24 players. Players can also compete in 4-player teams in two exclusive squad-only game modes, fighting together to unlock exclusive team awards and achievements. The Onslaught mode expands the offering with a competitive 4-player co-op mode. Excellence in the battlefield is rewarded with an extensive range of pins, insignias and stars to unlock along with 50 dedicated ranks to achieve. All of these features combine to deliver spectacular and unpredictable action moments found nowhere else in the genre. Battlefield Bad Company™ 2 is all-out multiplayer warfare at its absolute finest, and the Ultimate Edition just made it even finer!Features: All-out-warfare multiplayer. Experience the signature Battlefield multiplayer across a variety of huge open maps, each with a different tactical and gameplay focus and set across many different environments Vehicles! 15 land, sea and air vehicles are included, each with a tactical advantage during play. Race into action with the ATV or rain death from above in the UH-60 transport helicopter with its 2 side-mounted rail guns. The choice is yours. All-new squad gameplay. Team up with 3 other players and fight together to unlock special awards and achievements in the two squad-specific game modes Squad Rush and Squad Deathmatch. Destruction 2.0. Take down entire buildings, create vantage points in cover or blow it up entirely! In Battlefield Bad Company™ 2 there is no place to hide! Additional downloadable VIP maps – Prolong your experience with 10+ new maps by entering the included VIP code and downloading the extra content. Ultimate Edition Specific Features: Battlefield 1943 —the Ultimate Edition includes the award-winning and best-selling downloadable game Battlefield 1943TM. Enjoy the thrill of a fully featured WW2 online shooter with the unique Battlefield sandbox experience. Onslaught mode — play 4-player co-op in this expansion that challenges elite squads to get to the top of the Onslaught-specific leaderboards, and serves as an introduction to multiplayer for those new to the battlefield. Limited Edition unlocks —  get immediate access to four vehicle related unlocks and two weapon unlocks from day 1, a bonus originally included in the Battlefield: Bad Company 2 Limited Edition. 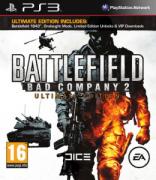