The scariest game ever creeps onto Wii

Twin sisters Mio and Mayu Amakura are visiting a childhood play spot, when Mayu follows a mysterious crimson butterfly deep into the forest. Concerned for her twin, Mio follows Mayu, and the two twin sisters are led to a lost village. When they reach the village, they notice that the path they took to this mysterious place has vanished. Mio must uncover the mystery behind the Crimson Sacrifice Ritual, while chasing her sister, who is becoming increasingly possessed by the evil spirit of Sae, the last girl to be sacrificed……

In Project Zero II The players incarnate Mio, a Japanese teenager who explores a haunted village looking for her twin sister Mayu. The village is home to tormented spirits born from a sinister ritual and Mio’s only way to fight them is by using the "Camera Obscura", an artifact that can defeat evil spirits by taking pictures of them.

During the game, Mio must explore the entire village area and its central buildings, and needs to find various objects and solve puzzles in order to advance. Throughout the game, Mio will encounter different kinds of ghosts; some of which appear unexpectedly, while others appear during cutscenes. In addition to hostile ghosts, there are numerous vanishing and hidden spirits Mio can photograph for points. The vanishing ghosts often talk, giving some information related to the story, or a hint on how to progress…. 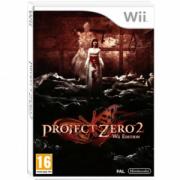