LEGO Batman 3: Beyond Gotham Season Pass The LEGO Batman 3: Beyond Gotham DLC Season Pass is the first ever Season Pass for a LEGO videogame. It will include six add-on content packs, each with a uniquely themed mission level with story and free play modes. Players will be able to unlock more than 40 characters, vehicles, achievements and more. The first three of the add-on content packs will be available on November 14th and three more will be announced at a later date. The Season Pass will be available for Xbox One, Xbox 360, PS4, PS3, and PC for the great price of £11.99. Each pack can be purchased separately at £2.50/pack. Season Pass Content: The Dark Knight Pack (available 14/11/14) Experience the heart-pounding chase scene from the iconic film complete with cool vehicles and explosive action. Play as the legendary Dark Knight and Commissioner Gordon, as well as the Joker and his goons as they chase down Harvey Dent's police escort. Bane and Catwoman from the third film are also playable. Man of Steel Pack (available 14/11/14) Help Jor-El, his wife Lara and their robot Kelex send the infant Superman "Kal-el" into space towards the safety of Earth as Krypton falls into chaos. Find a way inside Jor-El's home, fight General Zod's invading forces and battle against Zod himself to save Superman. Batman 75th Pack (available 14/11/14) Play as Joker and Harley, setting up a variety of celebration set pieces. Take on the role of the Dark Knight and play as some of the most iconic faces of Batman through the years, including his first appearance in Detective Comics #27. There is even more DLC content to come. Gain access to three additional game packs, featuring new playable characters, vehicles and levels. Details about the additional content will be revealed at a later date. The best-selling LEGO Batman videogame franchise returns in an out-of-this-world, action-packed adventure! In LEGO Batman™ 3: Beyond Gotham, the Caped Crusader joins forces with the super heroes of the DC Comics universe and blasts off to outer space to stop the evil Brainiac from destroying Earth. Using the power of the Lantern Rings, Brainiac shrinks worlds to add to his twisted collection of miniature cities from across the universe. Now the greatest super heroes and the most cunning villains must unite and journey to different Lantern Worlds to collect the Lantern Rings and stop Brainiac before it’s too late. Features: Exciting space combat - For the first time ever, battle with Batman and his allies in outer space and the various Lantern worlds including Zamaron and Odym. Robust roster of DC Comics heroes and villains - Play and unlock more than 150 unique characters with amazing powers and abilities, including members of the Justice League, and BIG LEGO Figures such as Cyborg, Solomon Grundy and more. Unique storyline with new plots and twists – Surprising disguises, Brainiac’s mind control ability, and the power of the Lantern rings bring a whole new twist to characters you thought you knew. Hack computer terminals - Enter a virtual world to escape mazes, battle in arenas, and race to find the code. Bat-tastic Gadget Wheel - With a simple press of a button, choose and upgrade select character’s suits and abilities. Variety of iconic locales - Visit the Hall of Justice, the Batcave, and the Justice League Watchtower to access shops, trophy rooms, and the hero and vehicle customizers. Click Images To Enlarge 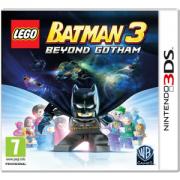